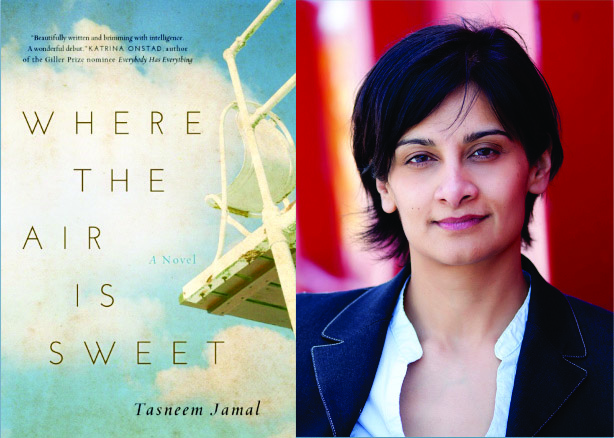 We had a very special meeting of the Reading Central Book Club at Central Library this week.

The novel for June was Where the Air is Sweet, and author Tasneem Jamal joined us for a wide-ranging discussion of her novel, her writing process, and the family story that inspired it all.

Tasneem was born in Uganda, but her family, along with 80,000 other South Asians, was expelled from the country by dictator Idi Amin in 1972.

Where the Air is Sweet follows the arc of historical events, and the timeline of her own family. Her grandfather immigrated to Uganda from India in the 1920s, becoming a successful business owner and raising his family in Mbarara.

But this is fiction of the highest order: telling the stories of three generations of family from the inside, while reflecting an increasingly hostile political climate. Tasneem has drawn a world where things left unsaid can carry more weight than conversations at the dining room table; where the expectations of Indian culture are transported to an African backdrop; where the least important of family relationships ultimately become the richest and most profound.

It’s a book Tasneem has wanted to write since she was in her 20s. Working full-time as an editor at the Globe and Mail, she finally got started, and wrote about 60,000 words. But she didn’t love them. It wasn’t working.

Then, she and her husband, with two small children, moved to Tanzania, where she tossed out most of what she had and started fresh.

When she returned to Kitchener, where she was raised and now lives, she relied on Kitchener Public Library to continue her research. It was here that she accessed Globe and Mail reports from 1972 and 1973, as well as an invaluable book – General Amin by David Martin.

“I think I had that book out for months,” she said. “I kept renewing it, and returning it, and signing it out again.” She looked for the book at Amazon, but it was too pricey to purchase.

We’re grateful to Tasneem for sharing her thoughts on writing, the characters she created, and the ways her novel reflected her own family history. In 2014, she was named one of CBC’s Writers to Watch, and we can’t wait to read more of her work.

One woman who attended the book club loved Where the Air is Sweet so much, she purchased an extra copy and donated it to the library. (Thank you!)

Interested in learning more about Asians in Uganda, Idi Amin, and other stories from Africa? Check out these
related reads.

Want to join us at Reading Central Book Club? New members are always welcome. Note: the author will not be present at these upcoming meetings.

Tuesday, August 11    A Grown-Up Kind of Pretty by Joshilyn Jackson